In Augustan Rome, it was believed that chickens were the divine messengers of the gods. The title is a reference to a time when birds and animals were much more important to man. As one of the oldest forms of fortune telling, augury is the art of foreseeing future events by observing the behavior of birds.

Ideas for this series began as I read The Omnivore’s Dilemma by Michael Pollan. Increasingly I was becoming dissatisfied with our food industry standards. As I thought about our farmed animals, the chicken came to mind.

English writer, John Berger wrote an essay titled, Why Look at Animals?” He suggests that the loss of everyday contact between man and animal has left us confused about our relationship, specifically, he writes about looking an animal in the eyes. Michael Pollen writes … “but this is what can happen to you when you look. And what you see when you look is the cruelty – and the blindness to cruelty – required to produce eggs that can be sold for 79 cents a dozen.”

These portraits were inspired by those words. I invite you to look into their eyes.

Susan Squire writes, “Augury is a type of knowledge-making about present and future that is in danger of disappearing in the 21st century: the knowledge gained by intimate relations with animals. Accepting animals farmed for their meat and eggs in a process of rationalized scientific management, we have lost the ability to see what they augur for our collective future.”

Today’s augury is a new mode of awareness, recognizing a need to re-connect our relationship with animals built around honor, crucial to ongoing life, human health, and cultural ritual. 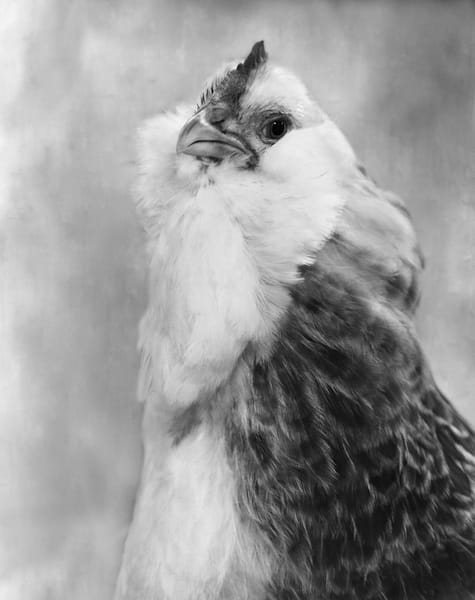