As night falls over the Makgadikgadi Pans, giant trees stand starkly against the horizon. Leafless branches reach for the light. On the opposite side of the sky, Earth’s shadow is rising. True wildness manifests itself in the form of curling black branches in November, silhouetted against an indigo sky.

Time exposures blend the boundaries between the visible and the invisible. There is a middle zone where splendor comes into being, where two different realities mingle and blur. If magic exists anywhere, it is here.

Our relationship to the wild has always played an important role in my work. This series was inspired by two fascinating, scientific studies that connect tree growth with celestial movement and astral cycles.

Researchers from the University of Edinburgh have shown that trees grow faster when high levels of cosmic radiation reach the earth’s surface, concluding that cosmic radiation impacts tree growth even more than annual temperature or rainfall. Secondly, renowned researcher, Lawrence Edwards, found that tree buds changed shape and size rhythmically, in regular cycles all through winter, directly correlating to the moon and planets.

David Milarch, founder of the Archangel Ancient Tree Archive, has said, “Trees are solar collectors. I believe energies inside the earth are transmuted and transmitted into the cosmos by the trees, so the trees are like antennas, senders, and receivers of earth energies and stellar energies.”

This work marked the transition not only from film to digital capture but also from black-and-white to color. Up until this point the majority of my work was done with a medium format film camera, but the long exposure time needed to photograph at night was not possible with film. Evolving digital technology has produced cameras with features that accommodate these conditions such as lower noise option levels and higher ISO settings.

I used a wide-angle lens and an ISO of 3200 to 6400. Exposures up to thirty seconds allowed enough light to enter the lens without noticeable star movement. Each location required considerable experimentation and different lighting techniques. 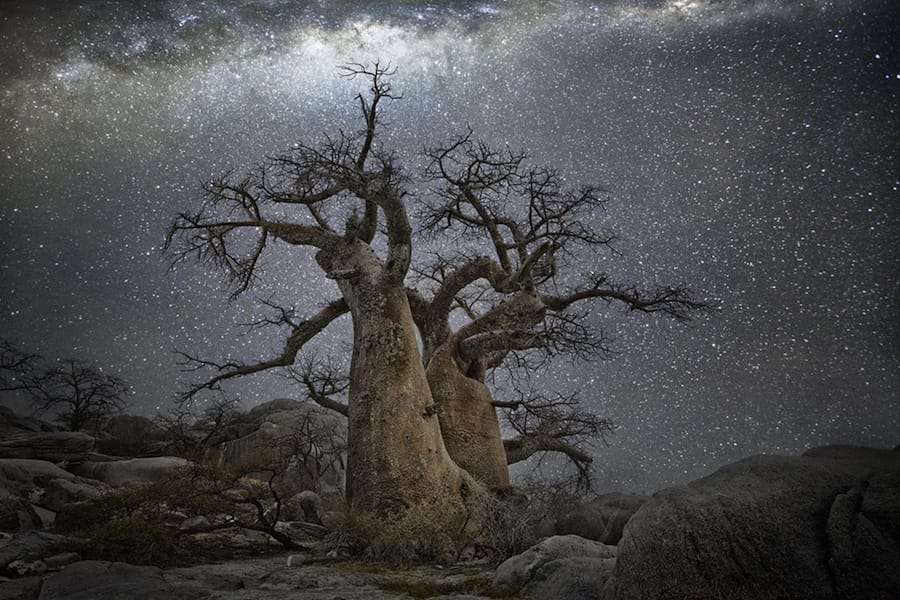